Teak Decks Why Fake it? 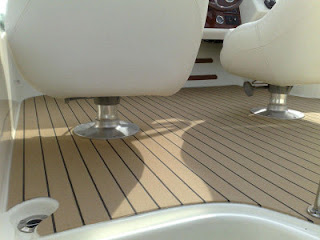 The all new Sunseeker 29 made her world debut at the London Boat Show, which runs until January 15th.
It is a beautiful little Superyacht, well designed with lots of great innovations that make her stand out among other Sunseekers.
Interestingly she is fitted with a very realistic looking fake teak deck.


We were being shown around the boat by one of the senior Sunseeker management who proudly told us that the decking had been coloured to look as if it had been weathered.
Looking at it, we had to agree it was a very good likeness indeed. But it did present the question that I find hard to answer.  Why?
If you can afford a 5 million pound superyacht but cannot afford the teak deck why pretend that you have got one?
If on the other hand, you have a moral objection to using one of the worlds fast diminishing resources then again why spend all that money faking something that makes the viewer think you do support it.
Why do that, when you could just as easily have the same material finished to look like something else.
Why not for example, have it finished to look like pebbles on a beach or the sand from a coral island?
It could just as easily be made to look like bricks or stone so why fake it to look like teak?

Why not make it look like some thing interesting instead of pretending to have something that you have not got.
It’s not the deck material I am quibbling about.  In fact I am rather impressed with its stain resistance and the ease with which it can be cleaned and, if necessary, repaired.
Does anyone else have a view on this?

3 Responses to “Teak Decks Why Fake it?”