Campaign to Build a Superyacht for British Royal Family Hots Up 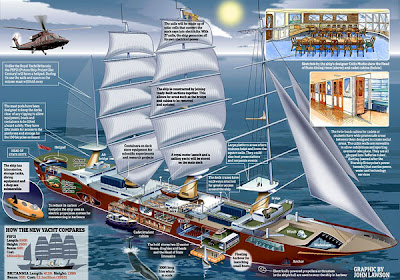 The Royal Yacht Britannia was built at John Brown’s Clydebank Shipyard and delivered in 1954.
She was retired in 1997 and consigned to become a tourist attraction where she has had considerable success.
Now plans are afoot to build her replacement.  The Daily Mail newspaper  recently announced a campaign to build a 21st-century successor to the Britannia.
Sister newspaper The Mail on Sunday then posted an artist’s representation of a proposed replacement.
They propose that the £80 million yacht be built as a four masted square-rigged barque.  Auxiliary power would come from a diesel electric power plant that would give the yacht a speed under engines of around 20 knots and a range of 6000 nm.
The newspaper suggests she could be built with solar cells incorporated into the sails, carry a helicopter, a miniature submarine, two buses, 100 bicycles and an underwater laboratory.
Codenamed FSP21 (Future Ship Project 21st Century) the plan is to build the ship using funds raised from private and corporate sources.
If built she will the 84th Royal yacht to fly the Royal Standard since 1660.
The idea being that in addition to Royal duties she would act as a floating British Embassy, promote Britain by hosting trade shows and would be used to train cadets.
Specifications