Superyacht Plans to Break the Round the World Record and Complete 24,000 in Less than 50 Days 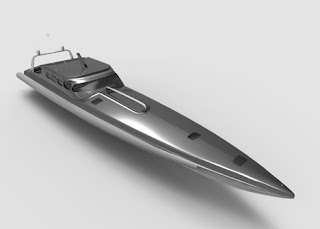 When it comes to around the world record breaking voyages which is faster, a power boat or a sailing yacht?

If you said power boat you would be wrong!  Currently a New Zealander is the fastest motor boat skipper to make it all the way round but if the British skipper Alan Priddy has his way all that’s about to change.
His concept is to design and build the fastest and most efficient wave-piercing powerboat to circumnavigate the globe for the much coveted UIM world record, which is currently standing at 60 days 23 hours 49 minutes.
The Global Circumnavigation Challenge team lead by Priddy intend to cover the 24,000 miles at sea in under 50 days.
What’s more his chosen craft is going to be 24 metres overall.  In other words according to the MCA: a large yacht or one better known to you and I as a superyacht.
Now suddenly I am interested to learn more.  Are you?