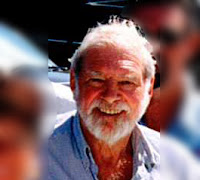 One of the Founding Fathers of modern day superyacht chartering has slipped his cable and sailed on into the next world.

Rodney Nicholson son of the now famous V E B  Nicholson, brother to Desmond and one time husband to Julie all famously connected to the world of superyachts and chartering died on 7th November 2010.

Born on 19th December 1927 the son of a Royal Navy officer Rodney first learned to sail in Bermuda during the war years where his Father was based.  After the war he helped restore the family yacht that had been purchased during the war so the family could legally raid her for the much needed ashore knives forks and spoons her kitchen drawers held.


Once completed they sailed to the Caribbean island of Barbados hoping to find work.


Finding the sugar industry there not as sweet as they hoped so they set sail northwards and Rodney with the rest of his family arrived in what was then a very run down English Harbour Antigua on March 9th 1949 at 1630.  Mollihawk the yacht they arrived in was to later make that her home port from where their father, the Commander used the yacht to offer short trips to sea to those very few tourists who actually arrived in Antigua on holiday.

The trips became longer lasting several days as Mollihawk moved from one idyllic anchorage to yet another and the yacht charter market in the Caribbean had begun.  Word caught on more folk sought more yachts and eventually others came and a clearing house called Nicholson Yachts was created.

It was a family affair everyone mucked in and helped and when in 1956 Rodney married Julie a young lady who had circumnavigated the globe aboard Yankee she was roped in to sell yet more charters a job she continues to this day.

The family started what has now become The Antigua Charter Yacht Show which this year celebrates its 49th Year and it is during that show that Charter yacht crews, brokers and industry specialists will gather to pay their last respects at a special service of remembrance to be held inside English Harbour on 8th December at 1430 hrs.