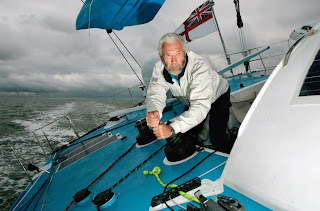 Sir Robin Knox-Johnston will become one of only seven people ever to be awarded the Blue Water Medal without a date by the organisation that presents it.

Born March 17, 1939 in Putney, London, Knox-Johnston went to school at Berkhamstead in Hertfordshire. He served as a deck officer in the British Merchant Navy joining British India as an officer cadet in 1957 and later gained his Masters Certificate in 1965. Between sea voyages in Bombay he built Suhaili, a 32-foot 5-inch LOA (length overall) India teak ketch of the Colin Archer type and sailed her to England.

With Suhaili he entered the 1968 race for the Sunday Times Golden Globe Trophy for the first person to circumnavigate the world nonstop and singlehanded. Suhaili was the only boat to finish the race, completing the 30,123 mile course in 312 days. Robin Knox-Johnston donated his £5,000 prize to the widow of his competitor Donald Crowhurst, who was lost at sea during the race.

In 1988 Suhaili started in the OSTAR Race across the Atlantic, but had to retire after 800 miles due to leaking seams. In 1989, after re-caulking, she set off across the Atlantic following Columbus’s route using only an Astrolabe for navigation. Arriving in San Salvador after 3,000 miles, they were only off 8 miles in latitude and 22 miles in longitude. On the return voyage in November of the same year, a large storm knocked them down four times and they lost both masts. Under jury rig they sailed 1,400 miles to the Azores.

In 1990 Suhaili sailed north of the Arctic Circle to Greenland’s east coast so that a small team might attempt to climb a virgin peak. In 1992 Knox-Johnston was invited to become President of the Sail Training Association, a youth development organization which operated two topsail schooners. He also organized annual tall ship races and, before he retired from the post in 2001, £11 million had been raised to replace the two schooners with two larger brigs.

Since winning the Golden Globe Trophy in 1969 Robin Knox-Johnston has participated in seven quadrennial double-handed Round Britain races. He skippered Condor to line honours in two legs of the 1977/08 Whitbread Race, co-skippered Enza New Zealand with the late Sir Peter Blake in 1994 to take the Jules Verne Trophy for the fastest circumnavigation of the world, and completed the Velux5Oceans solo around the world race in 4th position in 2006/07 at the age of 68.

In 1995, Knox-Johnston was knighted by the Queen. Notably, he has been named the 1994 ISAF World Sailor of the Year, the United Kingdom’s Yachtsman of the Year three times, and in 2007 he was inducted into the inaugural ISAF Hall of Fame. He has served as a Trustee of the National Maritime Museum and is currently President of the Little Ship Club and Chairman of Clipper Ventures.