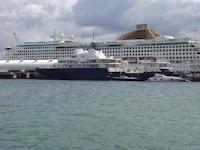 With superyachts the likes of Pelorus, Ecstasea, Maltese Falcon, Mirabella V, Samar, Leander, T6 and Le Gran Bleu using harbour facilities you would think I was describing Monaco rather than Southampton or Portsmouth but if port authorities and local ships agents have their way, the number of superyachts using UK ports in the Solent is set to rise.

Tim Wainwright, managing director of Southampton based Superyacht Agency, a division of local shipping company Wainwright Bros & Co Ltd said: “Already we are getting requests for a good berth in an attractive location near the city centre. Super yachts want good facilities, water and electricity and parking for drop offs and we can offer a 120 metre superyacht berth, close by the Ocean Cruise Terminal that has all that and even a helicopter landing pad for the use of super yacht owners seeking to join the yacht”. In addition to offering domestic inward and outward customs clearance, the company offers; bunkering, provisioning, husbandry requirements, ground transport and accommodation.

Gun Wharf Quays in Portsmouth frequently play host to visiting superyachts with Complete Freight now part of Peters and May and Royal Oceanic acting as yacht agents for the purposes of clearing in and out. Numbers of superyachts using Solent ports are expected to rise especially with the London Olympic Games offering an additional attraction.

Superyacht berths in prime city locations like Portsmouth and Southampton will obviously attract more superyachts to these cities and several agencies are in the process of marketing the concept and are working with port authorities to make it happen.

Many major ports around the world already capitalise on their port facilities that are less used now that containerisation has left conventional cargo docks under used. Southampton has the added benefit of close road and rail links to the country’s capital and has its own airport at nearby Eastleigh.

Refit facilities such as are offered by the likes of Southampton Yacht Services in Saxon Wharf and Marina Projects in Gosport add practical value to calls into Solent ports.

Marine interiors specialist Trimline also intend offering superyacht refit services in the area. The company will operate from Halmatic’s former yard in Trafalgar Wharf, Portchester, with access to a 122 m wet dock, 121 m x 4 m shed and a lifting capacity of up to 60 m and 877 tonnes. The company has appointed Roger Nicholson, founder of UK joinery firm Nicholson Interiors as the group’s new director of business development. Nicholson, in Southampton, he has held a similar role with Struik & Hammerslag for the last four years.