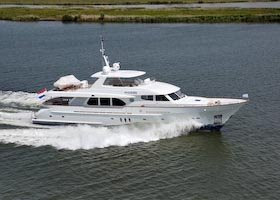 Dutch builder Moonen has launched the first of their 99 Alu, a stretched version of their 94 Alu Semi-Displacement Fast Yacht Series.

The yacht has the same superstructure footprint as her smaller sisters with essentially the same accommodations and engine room areas. The added length was applied to enlarging crew quarters and lengthening the main afterdeck and flying bridge. On the main deck, the saloon is typical of many of the company’s yachts, but has a larger adjoining enclosed galley with its own door to the side deck. The wheelhouse centres on a console with engine controls; a plush settee is set aft for guest observation. Stairs lead to the flying bridge and sundeck.