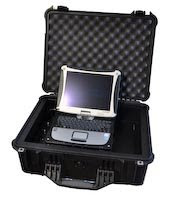 A new, computerised analysis programme has been introduced by the Ferretti Group to immediately and clearly determine whether a yacht in service still complies with strict tolerance parameters set by them during the build.

Referred to as FAIR (Ferretti Analysis Integral Recorder), it is the very first integrated system to be used for monitoring the performance of group yachts during testing, enabling not only simultaneous acquisition of operating data, but also its analysis and processing.

Rather like modern motorcar analysis testing devices, the display visually shows operating faults or deviations from the standards expected of any model in the company’s build portfolio. This enables engineers to determine, correctly, the conformity of a specific yachts against specifications previously determined by set down by the Ferretti group’s naval research and design centre known as AYT (Advanced Yacht Technology).

Developed in association with the Department of Information Engineering, Electronics, Information Technology and Telecommunications at the University of Pisa the system is built using star architecture, a forth generation of PBX switching technology.

By doing so the devise produces a continuous, flow of data using a ‘plug and play’ interface which connects the system to all the information sources on board the yacht. With one click the user, can make over thirty important measurements relating to the engines from the longitudinal and transversal trim tanks to trim-tab positions, helm angle, engine revolutions, fuel consumption, range, speed, veer ranges and more. All are registered simultaneously using one hertz frequency enabling synchronisation and integration of all data coming from the many different sensors and subsystems on the yacht. The system also enables synchronisation with other systems, particularly in the area of high frequency detection apparatus used for measuring vibrations and dynamic stress.

The system has been used experimentally since 2007 on its range Pershing yachts. It was then tested on all the models of the group before being launched across the groups range.

Its use will enable all Ferretti clients to achieve quality and market standards set by the company when their yacht is serviced and devices have been supplied to all group shipyard testing departments.