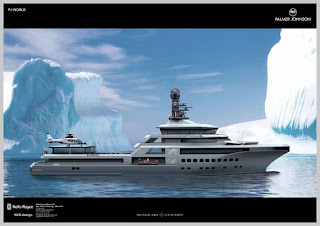 Websites dedicated to the auto motive industry are awash with stories appertaining to the use of Rolls Royce engines that are to be fitted aboard the new 82 metre ice class yacht that will build in Norway.

Few of the websites mention that the yacht is in fact to carry the name of Palmer Johnson as the super yachts builder following their acquisition of the Flekkefjord & Slipp, a builder of exploration vessels

Designed, as are most PJ yachts, by Italian naval architects Nuvolari-Lenard, the yacht is described as having a:

Currently known as the PJ World Yacht the concept is said to include:

The yacht will even be equipped with pirate-defense features that will include water cannons and thermal imaging cameras.