Demasted Superyacht Gets Towed to Safety 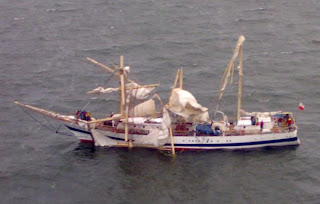 The Polish sail training ship Pogoria has been dismasted off the coast of Finland whilst racing to St Petersburg in Russia. 37 members of her crew of 50 were winched to safety by helicopters of the Finnish Coastguard helicopters leaving a skeleton crew of 13 to stay on board while she was towed into Hanko. The cause of the dismasting is not yet known but speculation suggests that internal corrosion of the masts may have been the cause.

Designed by Zygmunt Choreń and launched in early 1980, work on constructing Pogoria began in the Gdańsk Shipyard, Poland, during the late seventies for the Iron Shackle Fraternity, a sail training organisation linked to a Polish Television company. She made her international debut, in the Tall Ships Race running from Kiel in Germany to Amsterdam shortly after her launch

Informed sources suggest that the barquentine is expected to be repaired to full seaworthiness shortly.