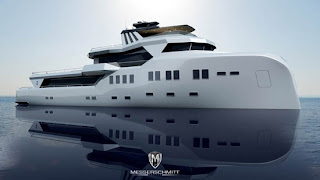 A very distinctive if a somewhat aggressive look.

Described by Messerschmitt Yachts as a Fortress for owner guests and crew, the German company’s newly released concept range of yachts under their Bulwark range is probably well described.  A high blunt nosed axe bow and an extra long aft deck give this explorer yacht a very distinctive if a somewhat aggressive look.  The hull which renderings show in either white or battleship grey is to be built capable of passing all classification requirements for ice class.  Several lengths of yacht are proposed in this conceptual series ranging from 35 to 55 metres with two sizes between those.  Designed by Roland Friedberger, the yachts are described as offering; maximum safety in extreme weather conditions and also being capable of top speeds approaching 22knots with an expected economical cruising speed of around 18 knots.  Specially constructed security systems are an option and perhaps this is where the opening description emanates.  All components will, they say, be constructed for endurance and longevity with materials mainly coming from Germany.  The interiors will be custom built to the designs of the Italian yacht designer, Filippo Rossi

Comments RSS Feed
« How Big Can a Super Yacht Become
Tunisia, the Next Super Yacht Destination »