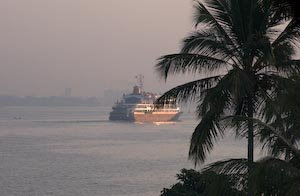 The Super Yacht world is becoming used to crossover encounters with the commercial world of shipping with many merchant navy crews taking up appointments as Captains and Engineers serving aboard superyachts but perhaps the commercial world is not yet ready to learn that a yacht broker has sold a cruise ship to a client and that it is about to become a Royal Yacht for a prominent Middle Eastern family.